As the greeting card industry is only beginning to reflect our diverse world, Black business owner and artist Otis Richardson has the solution for more inclusive greetings.

“The best part (of making cards) is getting feedback from customers and grocery store staff who appreciate the uniqueness of my cards and are happy to have another option for greeting cards geared towards black people,” said Richardson, who founded Lavenderpop in 2004. “A lot of small businesses, and especially black businesses, are undercapitalized. Over the next two months, I’m going to double the number of stores I go to. It’s a challenge when your profits flow directly back into the business, but I’m determined to make it work.

Lavenderpop offers a range of cards to celebrate relationships, friendships, love and pride. As its website puts it, “the brand is inspired by pop culture, graphic design, social revolutionaries, humanism, a good dance beat and a celebration of diversity.”

Richardson notes that this job is important to him as part of his mission to have more diversity in the greeting card industry.

Richardson’s artistic side was evident from the start. Growing up in the small town of Beaufort, South Carolina, he had a natural talent for drawing, painting, drawing his own comics, and making papier-mâché puppets.

When it came time to go to college, he studied arts education at South Carolina State University.

“During my senior year, the art department was going through accreditation. The accreditor was from NIU, and one of my professors showed him some of my paintings that were in a student art exhibit at the time,” Richardson recalled. “He was impressed and said that if I was considering graduate school, I could take advantage of an assistantship program focused on black and underrepresented students that would cover my tuition. My parents have always been supportive of my art and graduate school, and I thought this would be a great option to not overburden them with graduate school expenses.

Arriving at DeKalb, Richardson experienced a lot of new things.

“My studies as an artist really pushed me to create works that didn’t rely on tropes and to look for other ways to approach artistic creation,” he said. “Norman Magden from the Media Arts Department was very influential in my development. My assistant work took place primarily at the NIU Art Gallery with Professor Michael Flanagan, and my work there introduced me to the Chicago art scene.

Looking back on her time at NIU, Richardson notes that the University influenced her experiences in both art and activism. 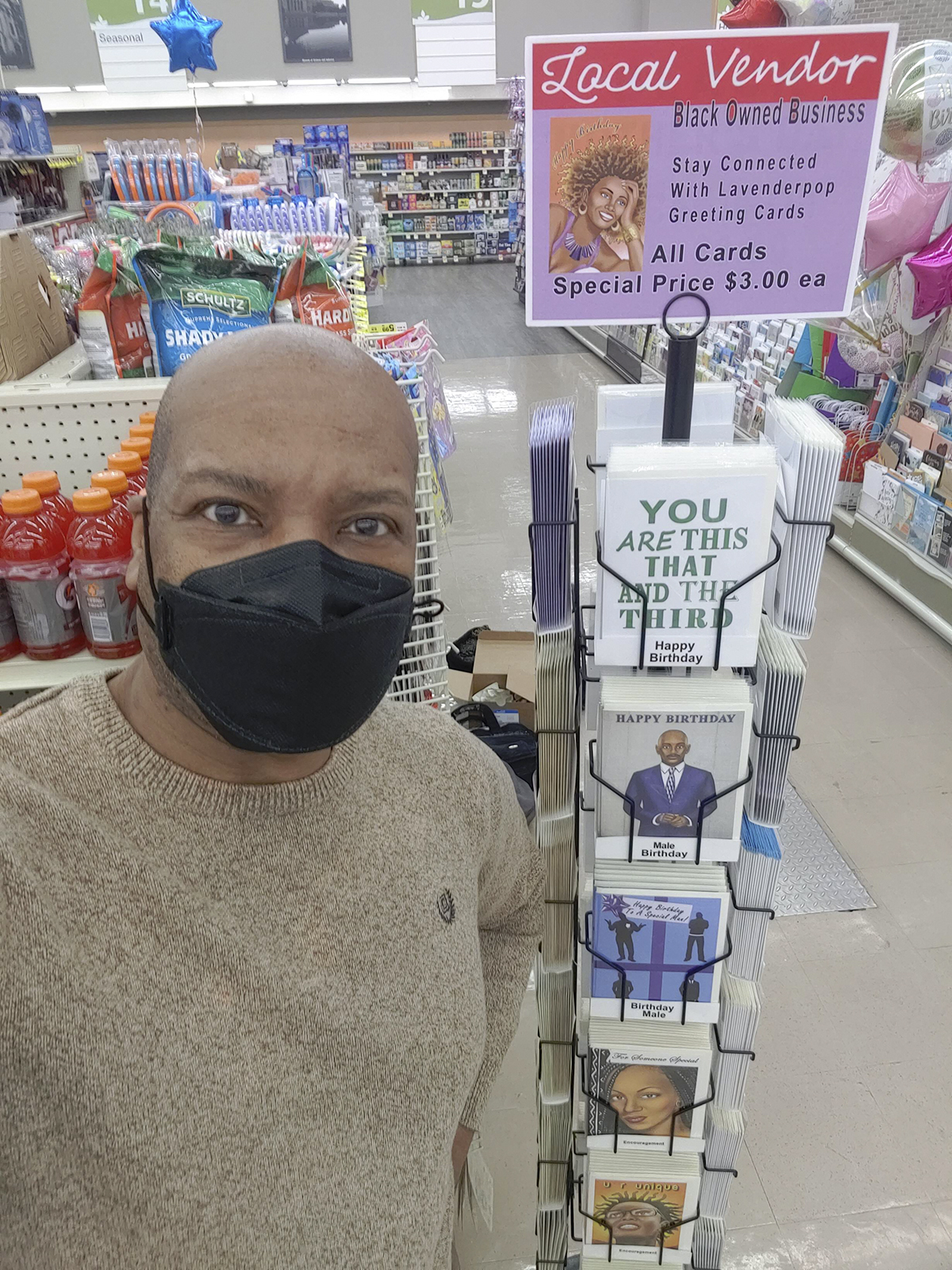 Richardson continues to expand its line of greeting cards, hoping to provide options that resonate with underrepresented communities.

“In addition to my studies in fine arts and the creative use of film and video, I have also been involved in social movements on campus,” he said. “In the late 80s, there were campus-wide protests against racial and LGBTQ discrimination. Being active in these movements for equality has allowed me to work and dialogue with people from diverse backgrounds. I was able to continue this work once I moved to Chicago.

After earning his MFA in Art, Richardson worked as a freelance illustrator and gallery assistant in Chicago. He also worked in various office jobs in health and education. For the past 14 years he has worked in the newspaper syndication industry providing B2B customer service and layout design while continuing to paint as an artist and create illustrations used in books and magazines.

Her work has been featured in Windy City Media publications, nationally in Sophisticate Black Hair magazine, and in the book “Out and Proud in Chicago.” His paintings have appeared in several exhibitions, including Black Creativity at the Museum of Science and Industry, Art Incubator, and Stony Island Arts Bank.

Richardson is active in the community with causes close to his heart, including the American Descendants of Slavery (ADOS) Advocacy Foundation, which advocates for reparations and transformational policies to close the racial wealth gap. He also sits on the board of directors of Deeply Rooted Dance Theatre, a dynamic company bringing together modern, classical, American and Black American dance traditions, and is a longtime member of the Soka Gakkai International (SGI) Buddhist community which seeks to empower people from all walks of life by promoting peace, culture and education.

On top of all that, in his spare time, Richardson continues to develop Lavenderpop in the Chicago area. It has expanded to sell its inclusive cards at 11 Jewel-Oscos, Whole Foods and Local Market Foods in Chicago’s South Shore neighborhood.

“One of the things that drives me is a never give up attitude. I really want to make a mark in the greeting card market,” Richardson said. gifts and hospitals. And I want people to see what I’ve done and help them if it’s something they want to do.

Your child can design the Tire Plus ND Holiday Greeting Cards

Inventory: Order your holiday cards from these BC small businesses